Giving a shy student a voice

Ja’Shyni was shy. She was shy to the point where she even struggled to tell her teacher her name on the first day of school.

“At home, she whispers mostly,” says her 4th grade teacher Lauren Aubry. “She only really talks in front of her mom and her grandma in a normal voice.”

While many of the other students will lean in to hear Ja’Shyni’s when she whispers, and speak up for her, Lauren was concerned the little girl’s shyness was creating roadblocks to learning.

Forcing Ja’Shyni to talk in front of the class wouldn’t necessarily have helped. At worse, it would have increased her anxiety and pushed her further into her shell.

Ja’Shyni started using the SMART Board in her Texas classroom as a way to communicate with the class.

She comes up to the board to write down her answers in SMART Notebook, instead of saying them out loud. She can post ideas from her desk using a tablet. Her peers can see what she’s thinking, and she can benefit from their encouragement.

If I just had a normal whiteboard, and none of the technology that connects in a visual way, she wouldn’t be able to show us what she’s thinking or what she’s saying,” Lauren says.

“Technology gives students a voice in a sense that they don’t actually have to use their physical voice to share their thinking or ideas. It’s really amazing.”

At the beginning of the school year, Ja’Shyni wasn’t speaking or participating. Now, she hugs her teacher, whispers to her classmates and finds other ways to communicate.

“I’ve already seen her grow so much and I’m hoping by the end of the year and with the help of technology, she’ll grow even more,” Lauren says. 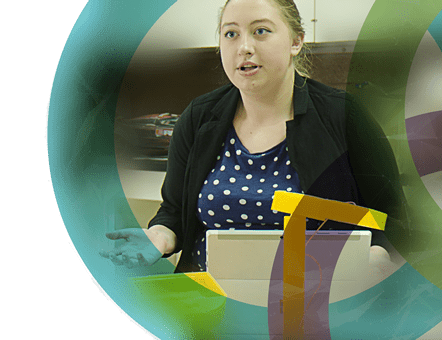 Cassie didn’t always know she wanted to be an engineer. Designing a product that helps millions of kids in the developing world opened her eyes.